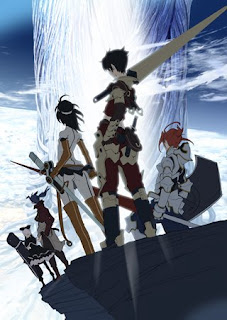 GONZO planned to release their new series nearly simultaneously in English and Japanese on various streaming websites, and on Friday, April 4 they did just that with the release of The Tower of Druaga: The Aegis of URUK (pictured). The three lucky(?) websites that streamed the subtitled first episode were YouTube, BOST TV, and of course, CrunchyRoll. In addition, GONZO released another anime (Blassreiter) in much the same way, utilizing all three services to deliver the first episode.

If anybody didn't catch that, that would make these two series the first ever anime to be released (essentially) simultaneously in both Japan and the United States.

While many critics (i.e. Daryl Surat) are apt to decry the alleged vapidity of GONZO's plotlines or shadiness of CrunchyRoll's business practices, one cannot deny the important impact an event like this will have on the domestic anime industry here in America.

Two things are (hopefully) about to happen here: One, legal releases will mix with illegal ones until the unwashed masses will end up watching predominantly licensed anime, paid for with online advertising. Two, GONZO will force the hands of not just other Japanese anime companies, but American companies like FUNimation (who they essentially screwed over after having years of licensing deals) as well. Now, even though these companies don't appreciate GONZO's backstabbing, they will be forced to enter the new realm of digital distribution or face the uncertain future of continued physical media distribution.
[via Anime News Network]