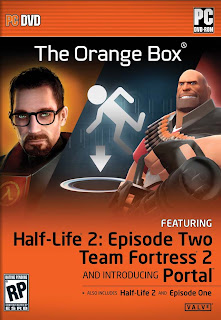 Joystiq reports that Valve will soon release individual retail copies of the constituent games from their hit title, The Orange Box. The titles, which will hit stores on April 9, include Half-Life 2 Episode Pack (Episodes 1 and 2), Team Fortress 2, and Official Seal of Nerd 3rd place winner Portal. These games have been available in their individual forms on Valve's digital distribution program, Steam, for some time, but this is the first time physical copies will be available.

Those wishing to simply catch up on their Half-Life, try out some Team Fortress action, or experience the magic of Portal can now buy only the games they want. Dare I say that this was a triumph?