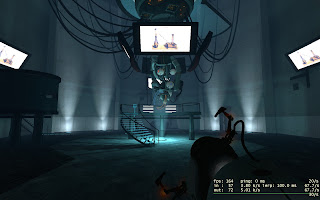 In a perfect fusion of nerdiness and nerdiness cloaked by rock music, Valve has announced the future inclusion of Portal's ending song, "Still Alive," as downloadable content for Rock Band. The announcement was made during Valve's GDC party, when Harmonix staff took the stage alongside Still Alive's original performer Jonathan Coulton to play the song in Rock Band.

For the record, Coulton scored a 95% on vocals. Let's hope that the Rock Band track features GLaDOS' singing, or Coulton might need a little (i.e. 5%) touching up on his singing.
[via Joystiq]