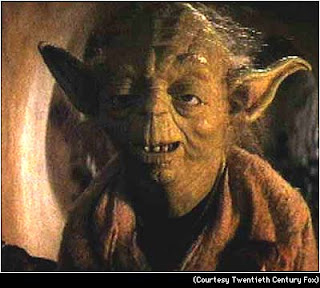 Well, for any of you who don't know, Soul Caliber is one of the greatest fighting games of all time. Ever since it started on the Dreamcast, it evolved with each system and sequel. In Soul Caliber 2, you could play as characters from other franchises, such as Link or Spawn. A character creator was introduced in SC3. So what's new in SC4?

That's right. You can play as Yoda on the 360 or Darth Vader on the PS3 (because nothing is more evil than Sony). A short video is available on Soul Caliber's website, showcasing the impressive visuals of the game. It will be avaliable on 360 and PS3 this summer.

Although it would be cool to see Darth Vader kill Mitsurugi, I think that this title, along with Super Smash Bros. Brawl, more than meet the quota of clashing franchises. Its a cool idea, but I have a bad feeling about this. It may be overkill. I also would have liked to see a Wii version, possibly with a playable Luke Skywalker, or maybe Han Solo or one of the Fetts.
-Raidon