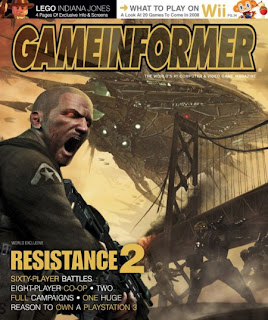 Yeah, you heard right. A NeoGAF poster has leaked, from his recently arrived February copy of GameInformer, details on the sequel to critically praised Playstation 3 launch title Resistance: Fall of Man.

The leaked specs for Resistance 2 include a single-player campaign and a separate cooperative campaign (2-player local, 8-player online), a 60-player online mode with dedicated servers, classes, and VoIP, and stat-tracking/community features using MyResistance.net.

The info is looking pretty sweet at the moment, and I can't wait to get my hands on the latest issue of the magazine. I don't own a PS3, and hence have never played Resistance, but the sequel is giving me the jealousy pangs towards all, you know, five of you that did buy one. With Metal Gear Solid 4, LittleBigPlanet, and Resistance 2 on the horizon, the PS3 looks to be making a strong comeback in the year 2008, with a nice, balanced mix of exclusives.
[via NeoGAF Forums]