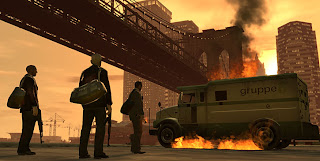 After months of delays and announcement-silence from Rockstar Games, the developer held a special preview of Grand Theft Auto IV this past Tuesday. MTV News' Stephen Totilo provided a rundown of the preview, and the overall opinion seemed very positive. We've compiled some of the highlights here in bullet form, conveniently appropriate for the GTA franchise. (Do you see what we did there?) [via MTV News]