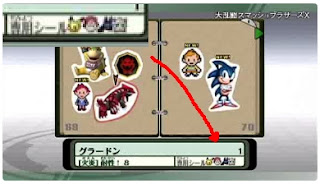 A week ago, a Super Smash Bros. Brawl "announcement" went largely unnoticed by many who stick to the Dojo blog for their SSBB news. During a special 5-minute Brawl trailer's stickers segment, Nintendo "accidentally" showed us a shot of a line of three characters. Shown in the images to the right and below, these characters are believed to be Ness, Lucario (he's a Pokemon or something), and Jigglypuff, respectively.

Most conspicuous is that the video was quickly edited by Nintendo, removing only that little detail. This is near-confirmation of at least Jigglypuff, but the other two are questionable. (That Ness one could just be Pokemon Trainer) Also, would someone like to tell me (and I assume most other sane human beings) what a Lucario is? I've been a bit out of the Pokemans loop for a while...

(EDIT: For clarification, the images show the characters who can get stat boosts from that sticker. The one to the right shows that Groudon can give boosts to Pikachu, Pokemon Trainer, Lucario, and Jigglypuff. The image below shows that Lucas' twin Claus can give a boost to Ness and Lucas.)
[via The Tanooki] 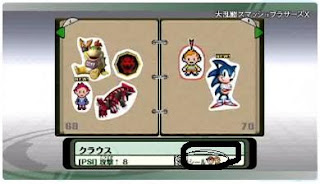