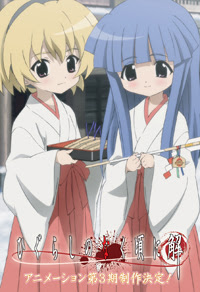 Will the crazy schoolgirls ever stop coming!?

While I watched the entire first season and thoroughly enjoyed it, I have yet to complete what has been released of the second. The plot has been thrilling and fast-paced so far, but I have my reservations about the novelty of Higurashi being able to stretch itself over more than 50 episodes.

EDIT: The blog also said that a 2008 release was likely for the new season.
[via Anime News Network]