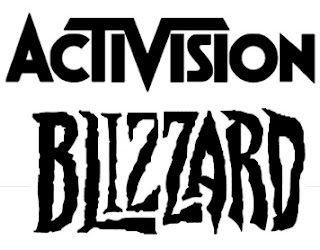 Okay, so a Vivendi and an Activision walk into a bar. And guess who walks out? That's right, An Activision Blizzard.

You see, there's a legitimate reason for that terrible bar joke. Activision, huge publisher and owner of such franchises as Tony Hawk and Guitar Hero, has announced a merger with none other than Vivendi Games, the company that owns--drumroll please--Blizzard, creators of World of WarCraft and StarCraft. (Note: If Blizzard=WoW is news to you, please hit "x" on your browser right now) We could try to sound intelligent and tell you this was completely predictable and a normal business move, but instead we'll stick with our gut reaction, namely "OMGWTFBBQ!!?"

In a deal of nearly $19 billion, Vivendi Games merges itself (and Blizzard) with Activision in exchange for a 52% stake in the newly-named company, the inspired "Activision Blizzard." The new company now controls the rights to a huge portfolio of games, including most importantly World of WarCraft, StarCraft, and Guitar Hero, but also Tony Hawk, Spiderman, and (like you still care) Spyro and Crash Bandicoot. Activision Blizzard will seemingly attempt to challenge EA's spot as the #1 games publisher on all platforms, and the battle of the monopolies should be a sight to see.

Blizzard has assured that World of WarCraft (and Blizzard's entire operating procedure) will be unaffected by the merger, but that won't stop the complaints of lot sof addicted girlfriend-less nerds. While many fear the use of in-game advertising in Blizzard's games, what I'm most interested in is a possible move to consoles. If Blizzard is pressured correctly by their new publishers as Activison Blizzard, the developer could end up making console games alongside its famous PC lineup. The effects of this change could be quite interesting. Just as Bungie, previously developing Marathon games on PC and Mac, created the prodigious Halo franchise after their acquisition by Microsoft, Blizzard just might create something extraordinary on consoles in the near future.

All that's left to do is wait and see. As industry consolidation looms ever-closer, we have seen things like Bungie jumping the MS ship and EA eating their fill of BioWare/Pandemic. While the implications of this merger have great potential, the problem remains that there is now one less game publisher out there, and one more massive mega-publisher. Electronic Arts, Ubisoft, Activision Blizzard: Let the games begin.
[via Joystiq and Business Wire]