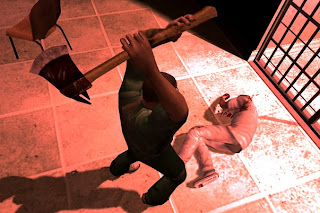 Various game hacking websites have recently released instructions for hacking the PSP and Playstation 2 versions of Take-Two and Rockstar's controversial horror game Manhunt 2. These hacks allow users to turn off the blur effects which Rockstar added to cover up the hyper-violent "stealth kills" in the game. Without these blur effects, the M-rated game is essentially made exactly like the AO-rated version submitted to the ESRB in June, which caused a huge public outcry and a reevaluation of the game by the ESRB.

ESRB President Patricia Vance made a statement shortly after the conclusion of an ESRB investigation of the alleged hacks of the game. She confirmed that the hacks do indeed exist, and made the following statements, among others:

"Our investigation indicates that the game’s publisher disclosed to the ESRB all pertinent content in the authorized Mature-rated version of Manhunt 2 now available in stores, and complied with our guidelines on full disclosure of content.

What parents, and indeed all consumers, need to be aware of is that computer software and hardware devices are susceptible to unauthorized modification. Parents should be cognizant of whether or not their children are engaging in unauthorized modification of their games, consoles or handhelds, as those modifications can change game content in ways that may be inconsistent with the assigned ESRB rating."

It is good to see Take-Two not being held accountable for this hack, since that was the fear held by most gamers during the few days that the ESRB held their investigation. Manhunt 2 went through an agonizing series of events a few months ago (jokingly nicknamed "Black Tuesday" by employees) that eventually ended in a ban from multiple countries as well as a temporary retraction of permission to publish on Wii, PS2, or PSP.