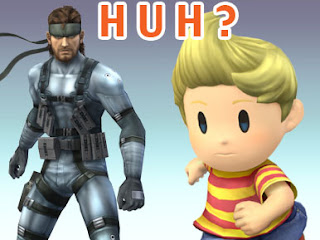 Oh God I hate Super Smash Bros. so much! I hate it, and I'm not going to buy Brawl. As a matter of fact, I'll smash my Wii to pieces, so nobody can play Brawl on it. You know what? I'm just not going to write anything about that dumb game this week. Obviously it's stupid. I mean, it's not like there's tons of people anticipating it or anything. Geez. Friggin' Nintendo. Welcome to Dojo Day.

Lucas: Mother 3 fans, rejoice, because you've got another character from the Mother series. Those not familiar with the series should note that Ness is the main character of Earthbound (Mother 2), while Lucas is the protagonist of Mother 3. Earthbound had been released in America years ago, while Mother 3 has never seen a US release. Those hoping for this long-awaited release aren't totally unreasonable in thinking that the inclusion of Lucas just might show Nintendo's decision to finally translate and release Mother 3. Lucas seems to be very similar to Ness, and it is assumed that he is a clone character of Ness.

Shadow Moses Island: The MGS additions just keep getting better and better. Here we have Shadow Moses Island, the iconic Alaskan island that serves as the primary setting for the first Metal Gear Solid game. The stage has some nice dynamic effects such as destructable pillars and different Metal Gears appearing in the background. (possibly one of the newer models as well) In addition, there are some humorous conversations involving fellow Smash characters on Snake's codec with classic characters like the Colonel and Otacon. As far as I can tell, they have actually hired the original voice actors to voice the MGS characters as well.

Snake Joins the Brawl: A cool little video introducing Snake and showing some fighting scenes with him.

Excite Bike: OH NOES MOAR RETRO! Pixelated Excite Bikes ride across the screen and hit characters for this Assist Trophy. Also, a pixelated Spiny-throwing Lakitu will be an Assist Trophy.

Fox-Final Smash: Fox summons the mighty Landmaster tank, as seen in Starfox 64. He rides around, rolling to throw off enemies, shooting huge energy blasts, and generally causing mass chaos. This is a pretty cool addition, but as a Final Smash, I feel this is just not quick and effective enough. An Arwing bombing run would be much more useful.

Team: More expansions to Subspace Emissary? You'd think they actually want it to be a fully-featured single-player! Oh, they do? In Team mode, two players can play Subspace Emissary coop style, with the first player controlling movement and camera, while player two follows along within the camera window. It's a cool feature, and might make Subspace Emissary something more than "meh."

Wow, there was nothing interesting this week. Lucas sure isn't cool for Mother fans. And I'm definitely not excited about the fact that Mother 3 might come to the US. Shadow Moses: lame. There's no way I'd want to play a classic MGS stage designed by Hideo Kojima himself. Oh, and Team mode is stupid. Nobody'll ever play it. So, can I get a vote for who also hates Super Smash Bros.? Nobody? Oh come on! Last week we got a whole lot more here on The Unofficial Nintendo-Hater's Club Newsletter. What'd you say? This is DOJO DAY?