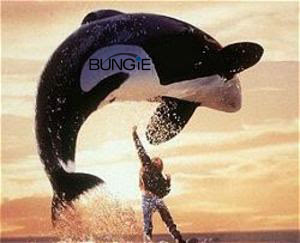 It's official--Bungie Studios, which has been owned by Microsoft for years, has split from their parent company, in an agreement that turns Bungie Studios into the independent third party "Bungie, LLC." Microsoft will still hold a minority equity interest in Bungie, but they will no longer own the company. Bungie is now free to develop their own games as a third-party developer, and so can create any title on any console they want, though they will still remain in a lasting partnership with Microsoft.

This comes less than a week after Microsoft's release of Halo 3, which quickly became the highest grossing digital entertainment property in history after grossing over $300 million in its first week. It is important to note that Microsoft, not Bungie, still holds the rights to the lucrative Halo property.

“Working with Microsoft was great for us [...] But Bungie is like a shark. We have to keep moving to survive. We have to continually test ourselves, or we might as well be dolphins. Or manatees,” said Jason Jones, founder of Bungie. Well, I get the manatees thing, but I'd have to argue you guys are a bit more like whales, if you know what I mean.

This move is incredibly important and unprecedented. At no point in video game history has a studio that had been bought by a large publisher actually split off of its own decision. It is even more strange because Bungie is such a valuable asset to Microsoft, due to the Halo franchise. The most common idea of what happened is that Bungie's employees were being made to continually work on Halo games due to decisions made by Microsoft, and they were often not compensated for the huge amounts of profit they brought in. Bungie employees threatened to leave en masse if Microsoft did not allow them to become independent. However, no one has yet heard the full story from either Microsoft or Bungie.

I wish the best of luck to Bungie, and all of its employees, in their future pursuits.
[via Bungie.net]