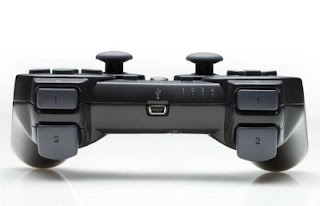 We're a little late in picking up this story, but hey, Sony was late in finally getting on with it anyway. The press converged just a few days ago at the world-reknowned Tokyo Game Show in Japan (who'd a thunk?) last weekend. There to give Sony's keynote was none other than SCEA President Kaz Hirai. He announced what every Sony fan (and quite frankly, gamer) has been waiting for. The PS3 controller finally has rumble, and the DualShock 3, jokingly called the RumbleAXIS, releases this April for an unspecified price.

It is notable that this is technically still a DualShock controller. Sony and Immersion have settled on Immersion's claim of patent infringement, and the two have apparently reached an agreement in which Sony can continue to implement DualShock technology.

This is great news of course, though the persistent rumors and sheer inevitability of the announcement made it a bit too anticlimactic to be Sony's "big" announcement at TGS, as they made it out to be.
[via Joystiq]