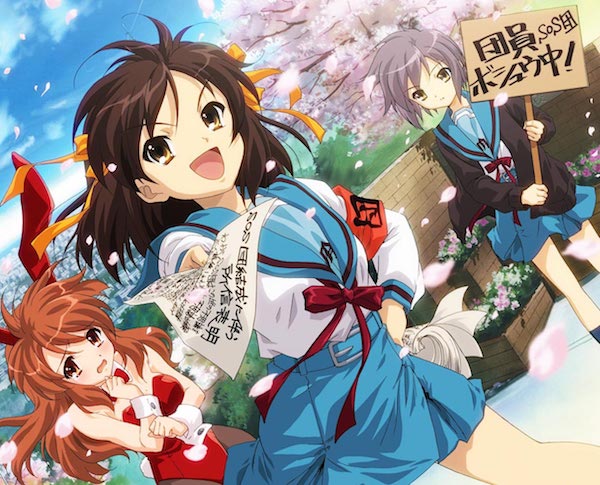 Haruhi Suzumiya no Yuutsu, better known as The Melancholy of Haruhi Suzumiya, is one of the most popular anime in the past few years. Adapted from the hit Japanese light novel series by Nagaru Tanigawa, Kyoto Animation's anime series features an adaptation of the first few novels, with character designs by Noizi Ito (of Shakugan no Shana). It follows the story of a typical Japanese high schooler nick-named Kyon. (You never find out what his real name is) He used to believe in aliens, time travelers, psychics, superheroes, and evil corporations, but he recently grew out of these childish thoughts. When Kyon comes to school, he meets a beautiful girl named Haruhi Suzumiya. However, in her introduction to the class she makes it clear that she is not interested in socializing with anyone who is not an alien, time traveler, or psychic.

From there, Kyon eventually befriends the strange girl and accidentally encourages her to form her own club. The "Save our World By Overloading It With Fun Haruhi Suzumiya Brigade," or S.O.S. Brigade is formed to "solve mysteries and unusual problems for people." Haruhi, an energetic, bossy, and often mean personality, gathers together members to solve these mysteries. These include the quiet, eclectic Yuki Nagato, the incredibly cute Mikuru Asahina, and the ever-optimistic Itsuki Koizumi. As you might have guessed, the show is a subtle parody of anime in general. Throughout the show, the twistings of the plot end up gently satirizing everything from school life to space operas to romance to existential science fiction. (The overlong name for Haruhi's club can be seen as a parody on the long names given to anime series, organizations, and episode names) In the background of the whole show, Kyon gives his sarcastic commentary on the unfolding events.

First off, do not be put off by the unprofessionalism and lack of plot in the first episode. It is a student made video created by the SOS Brigade for a school fair. If you watch it as a random comedic moment, the video is the most hilarious part of the entire series. (Especially after having seen the series and knowing the characters) The plot in Haruhi is...interesting... Please note that my review of it will be limited in detail so as not to spoil the plot details. The show begins with a very lighthearted, school-life comedy feel. You're expecting Azumanga Daioh mixed with a moe (a kind of cute, intentionally likeable young character) harem theme. Instead, around halfway through the show, you are treated to lots of sci-fi and fantasy elements, and the school life comedy becomes more of a sci-fi comedy. Haruhi has an important secret, and this is what the show ends up revolving around. you discover more and more about said secret, and watch the Brigade go through some crazy adventures. Suddenly, you reach a climax that has a lot of emotion, (and high production values of course) but feels rushed and tacked on. In the end, you can appreciate Haruhi for its comedy, but when it tries to be more serious, it can lose a viewer's interest due to its intentional lack of originality. While it tries to parody many different anime genres, this makes it feel random and hard to follow. Finally, the episodes are chronologically out-of-order, (for example, the first one is actually episode 12 or so) which both confuses the viewer and lends itself to TMoHS's unique and mysterious style.

In the end, though, Haruhi Suzumiya is driven almost solely by the characters. They combine a kind of moe appeal with very funny and over-the-top personalities. Kyon keeps the series from getting too serious by giving his sarcastic commentary on even the most dire events. Haruhi is so energetic that she drives the story all by herself. She busts into rooms with a scarily huge smile, blackmails people, and forces her club to participate in events. Yuki is fairly popular right now, for reasons I can't explain without giving away the plot. Let me just say that she gets some pulls off some very cool stuff, which is all accentuated by her quiet, nerdy personality. She's always reading books, and seems to have an answer for every problem the SOS Brigade comes across. Mikuru...hm, how to say this. She's primarily existant for fanservice. Big-breasted, clumsy, and innocent, she is engineered to be an otaku's dream. She can be funny, but mostly serves as a vessel for fanservice and a parody of fanservice. On that note, this series does have fanservice, but it is rare and restricted to the upper body. (nothing is really shown) Finally, Koizumi is cool and collected. He helps Kyon cope with the strange events happening around him, but always seems far too laid back and happy. He's interesting, but lacks a really fun personality.

Kyoto Animation worked an absolute miracle on The Melancholy of Haruhi Suzumiya, animating the show with amazing brightness, clarity, and quality. The incredibly clean art and lively character designs are clear proof of the ability of animation to greatly enrich a series. You aften forget errors in the story because the characters move so realistically and express themselves so vividly. Hirano Aya, J-pop singer and voice actress for Haruhi Suzumiya's character in the show, sings all of the show's songs. She sings with a lot of emotion and has some ealy good range. Of course, Aya sounding exactly like Haruhi really connects these songs with the show as well. Plus, the music is just so catchy!

The voice acting is surprisingly good not only across the board, but across the languages. Fans of the Japanese performances (which were great) will be pleased to find very skilled American voice actors lending their voices to the characters. Crispin Freeman pins down the deadbeat Kyon nearly perfectly, Wendee Lee works wonders with the energetic part of Haruhi, while Johnny Yong Bosch, Michelle Ruff, and Kari Wahlgren also deserve mentions for their performances as Koizumi, Yuki, and Tsuruya respectively. Each of these actors and actresses was cast extremely well, and the credit for that goes to Bang Zoom! Entertainment, who have worked on a huge number of dubbed series, among them such classics as Rurouni Kenshin, Mahoromatic, and Eureka Seven. The only problem in the voice acting is the same problem seen in the characters. Mikuru is voiced in both versions by annoying high-pitched women. While they capture her character well, they end up being jarring and unrealistic.

The Melancholy of Haruhi Suzumiya is quite simply an otaku's dream. The plot is quick, exciting, and funny, and the characters are some of the most unforgettable in recent years. While the show can get off-track and a little too weird and serious for its own good sometimes, it still rings true as a modern anime classic. Even for those who have seen the fansubbed versions, (come on, you know you have) the dub is worth watching for its new (and refreshingly well-produced) take on the series. TMoHS is a thrilling adventure as much as a heartfelt romance, a powerful sci-fi as much as it is a hilarious comedy. It is my belief that Haruhi is destined to become a fan classic in the years to come, and it surely deserves the honor.