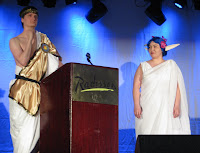 Zenkaikon, the follow-up to Zenkaikon 2009, escaped the previously exclusive and cramped confines of the Radisson Hotel in King of Prussia and took over the entire* Valley Forge Convention Center. The extra space, more than adequate to accommodate the 3,168 paying people who attended (not to mention guests, vendors, artists, staff, and press), was definitely worth the extra four-month wait caused by rescheduling that consequently eliminated the chance for a Zenkaikon 2010. Floor space allowed for generous registration and autograph queues; two Artist Alleys, the main one incorporated into the Dealer's Room and a small hallway that bordered the upstairs panel rooms; and navigation that was fast and easy compared to last con's experience of swimming through Con Funk-flavored JELL-O Pudding. The Dealer's Room, also benefiting from increased breathing room, was capacious and easily navigable, while the sole Main Events room was capable of hosting a riotous crowd.

The abundance of space in the Main Events room, however, also seemed an overbearing presence at times with regards to some of the scheduled panels and acts. On Friday, the Ancient Greek-themed Opening Ceremonies at 1pm brought in a decent crowd, but one that only occupied 1/5 of the room; Uncle Yo's standup around 5 pm almost filled the main section of the same space but saw sparsely populated wings; and Gelatine's concert at 7 pm catered to roughly 17 people total (some of whom unfortunately and very noticeably left during the performance). Though I didn't attend them, events such as the Sakura Cosplay Ball Dance, its after-party, the masquerade, as well as anything involving guests Vic Mignogna and Todd Haberkorn most likely saw much better attendance due to scheduling (at least). 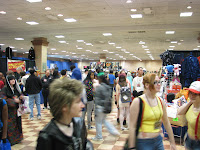 Thankfully, the echoes of footsteps audible on Friday were stifled by Saturday's deluge of congoers. The main parking lot was mostly full as of 10 am, registration lines snaked with eager attendees, and the aisles between rows of dealer tables bustled with patrons. Almost every panel I attended seemed to bring in a decent size audience that either almost or completely filled generously sized rooms. Some panels even turned people away due to being over capacity. Sadly, I left early on Sunday and did not get a chance to gauge attendance. I hope the trend continued; the last panel I saw, Charles "Anime Anthropologist" Dunbar's Miyazaki presentation, was pretty full.


As with the previous Zenkaikon, events scheduling was a bit awkward. Some of the troubles could be pinned on the fact that other groups had reserved certain rooms in the convention center during the con and Zenkaikon had to work around such obstacles, but the programming coordination, set to 15 minute intervals, led to awkward overlaps that often forced attendees to decide whether to leave early or arrive late if seeing consecutive panels in separate rooms. With that said, room proximity and general utilization of the convention center's layout made for effortless transitions between events. 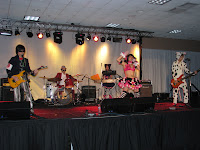 There were myriad points of interest, enough to cause internal conflict within even the most focused con-goer. Regarding live music, NYC's Gelatine put on a fun, energy-filled show — I regret not being able to see them for their second concert on Sunday, and Tokyo's own Rose Noire gave their U.S. concert debut to the applause of many decked out in goth/lolita fashion. Of course there was no shortage of good panels. Some of my favorites included "Iron Artist," "Feminism and the Ladies of Final Fantasy," and Charles Dunbar's Modern Mythology and Miyazaki sessions. Zenkaikon also hosted karaoke, electronic and tabletop gaming, as well as a con-long LARP (Live Action Role Play) event. All this was supplemented by video rooms showing a decent range of anime and live action series and movies. 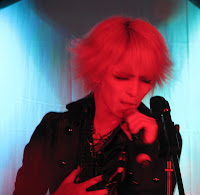 Panels and guests weren't the only focus of this heartfelt convention. Held just one week after Japan was subject to an earthquake as well as the resulting tsunami and nuclear plant crises, Zenkaikon put sympathy front and center. $3,750 in donations were collected throughout the venue, supplemented by some dealers and artists passing on all or a portion of their profits towards specific charities of their choice. Perhaps the most heartwarming sight was that none of said donation stations were ever empty, illustrating the love and concern shared by all attendees for the nation and people whose culture and art have given us so much.


Thanks to a very dedicated staff (I overheard members on many occasions offering to forsake breaks in order to help out wherever needed), Zenkaikon was efficiently run and easy to enjoy. The availability of a Press Ops room was also a welcome addition for productivity as well as actual and proverbial battery recharging, and the Scanticon Hotel's bar certainly didn't hurt either. At its current rate of expansion (there were 1,988 attendees in 2009), I have no doubt that Zenkaikon will fill those spacious rooms without any problem and for very good reasons. Looking forward to 2012!