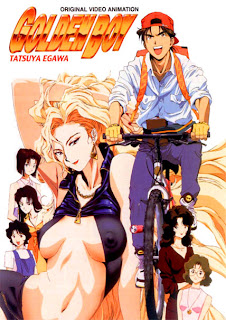 Kentaro Oe is a 25-year-old genius who leaves college just before graduation in order to travel on his bicycle and work odd jobs, studying the real world and gaining experiences beyond any textbook. A pervert with a heart of gold, he wanders into people’s lives, writes everything he learns in his precious notebook, and moves on before his employers can thank him — like something between a rōnin and a temporary laborer. He goes from being an office temp at a software company to a noodle chef to a children’s swimming instructor, each time using his brains off-screen to win the day. Golden Boy itself is a beloved anime from a generation of American otaku before mine, and even fans like me refer to it as a classic. With its US distributor, ADV, vanishing last year, Golden Boy has all but become an obscure taboo that rarely finds itself mentioned. This is a tragedy.

Golden Boy is pure fun to watch. Fanservice everywhere. No, no, I mean it this time. Put your mouse down and lean just a little closer to the screen: FANSERVICE EVERYWHERE. You think Colorful is about sex? If I were still fifteen this would be the greatest thing since Sailor Moon. Golden Boy has girls in swimsuits, kimonos, high school outfits, and just about everything else in between. Kentaro’s aggressive lust puts him in the most awkward situations; although to be honest, it could be avoided if he wasn’t almost molesting empty toilets, like he does in half of the episodes.

What I like most about Kentaro is his absolute moral integrity, honesty, and bottom-line desire to get his job done. The series’ final episode illuminates these virtues as he saves an animation studio from bankruptcy by calling in favors from nearly every woman in the series and proving that selfless teamwork and a little volunteering can pull off miracles. With the sun rising before him, Kentaro hits the road again. He may not have gotten the girl, but he changed all of their lives for the better.

Considering its age, (released in 1995) Golden Boy still looks and moves great. This is a series made by otaku in tribute to those big-haired action series like Fist of the North Star, where challenges were met with lighting-streaked backgrounds, and teeth were unnecessarily sharp for the fun of it. Whenever Kentaro begs for a job, he enters a shōnen parody animation style that is played purely for laughs.

What hasn’t aged well is the dubbing, which tried to copy the over-the-top (even for anime) voice performance of the original Japanese actors. I watched the entire run in English the first time because of my convention interaction with artist and voice actor Doug Smith, who plays Kentaro in the English translation, and I found his goofball voice too close to Barney the Dinosaur to enjoy. Most of the women portrayed are breathy or soft-voiced stereotypes you’d expect from a strict male fantasy, but most of the actresses still leave room for pathos and the good old-fashioned flashback monologue.

If I haven’t said it yet, Golden Boy is for any guy who wants a great sense of the anime fandom tradition: this is a boob-tastic series with plenty of laughs and odes to older series with just enough of a vague moral lesson to preserve and endure.

This review is based on DVD purchased by the reviewer.