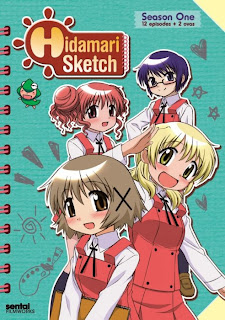 “Wait a second!” I can hear you cry. “A review of Hidamari Sketch? Since when has this site been called 'Moe-Gamers', huh?” Well, shaddup, stop crying “moe trash!” at everything you see, and give the show a chance.

Hidamari Sketch is an honest-to-goodness slice-of-life show that actually deserves the designation. The series follows the exploits of a group of perfectly ordinary girls who live in a dorm opposite the Art School that they attend, each story showing a day or two out of their lives. The show sticks closely to its original manga, even while it takes liberties of its own with how it presents events.

There is no overarching storyline to complicate things, and indeed the series seems to spurn such an idea by showing stories out of chronological order. This helps you get know the characters quickly by showing selected scenes to assist in this manner, a smart idea in such a character-driven show. This also backfires badly with an excruciating moment in the very first episode when two characters make blunt references to events that have happened previously in the timeline but that you have yet to see. This scene feels particularly absurd because the things being referenced are tiny mundane events, such as “Hey, remember that time the chrysalis you were keeping hatched?'

This tomfoolery with time is used to good effect at other times — half an episode may end with characters referencing an earlier event and the second half will show the event itself.

In the absence of a larger plot, the cast becomes a key factor in whether you will enjoy the show or not. While each member can be neatly summed up in a single phrase, they all have their own motivations and foibles to set them apart and are developed over the course of the series. Sadly, most of the developments are very limited, and the most impact felt by one is a quickly resolved argument. While this lack of conflict can feel rather stifling, it helps to make the series a relaxing watching experience when paired with its general presentation.

The art present in the show is my favorite element, as it never stops surprising you with new ways to enhance the action, or lack thereof. Tricks made easy by digital techniques, such as pasting flat textures as the background layer, including photographic elements or switching colors in an object, abound in Hidamari. Such things are used in a subtle and infrequent manner, never getting in the way of the already sparse narrative, and making you take notice when they do occur. In one particular episode the main character is unwell and is running a high fever, and so is highlighted with a searing red glow that neatly illustrates her condition without being superfluous.

The show itself is quite clearly constrained by a low budget and you can spot a multitude of money-saving tricks if you keep an eye out for them, although this sucks the fun out the series very quickly.

Hidamari Sketch succeeds as a comedy series because it works in multiple ways. In particular, it preys upon two things in anime that have me laughing every single time: Silly faces and absurd sound effects. I dare you to find someone who is not amused by the idea of a girl pulling a funny face and making convincing horse neighs. Even without the absurd moments, the show maintains an overall air of absurdity in the art and story that leaves you unconsciously smiling while you watch.

I want to talk about the release Hidamari Sketch has received, because it was a key factor in my purchasing decision. The entire first series run, including 12 TV and 2 OVA episodes, come packed into a single volume on two discs with no dub track. There are no extras inside the case, and sparse extras on the disc. You boot up a disc and you get a static main menu slapped right into your face, the screen glaring back at you and defiantly yelling “What, you wanted an animated menu? Language options? Hell no, shut up and choose an episode to watch!” Some people I talked to mentioned that they were worried that the high amount of episodes per disc may have impacted the quality of the video image, but I personally have not noticed anything of the sort.

One gripe is that the subtitles are sometimes subject to rather clunky and literal translation, which can kill a joke stone-dead, especially as there is no dub track to turn to when subtitles fail. There are also a noticeable number of spelling mistakes in the translation, something I am usually forgiving of.

Hidamari is never going to be a breakout hit, and Sentai Filmwork’s decision to release it in this way ensures that costs are kept low for the consumer. It is also a lot more convenient as the entire series is a single item to buy for a reduced price. Hidamari Sketch can be easily summed up as "charming": a nice little show to watch when you are relaxing that will cheer up even the most cynical and crusty of anime fans.

NOTE: Your personal viewing experience may vary — due to DVD region locking I had to watch this show using VideoLan VLC player to bypass this idiotic practice and doing so may have skipped some DVD elements.


This review is based on a copy of the Sentai Filmworks DVD box set release of the series/OAV purchased by the reviewer.