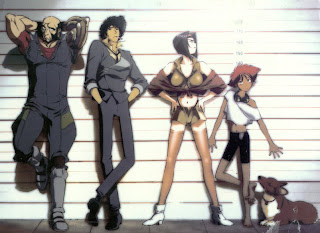 I apologize for the lateness of this article. A full month of straight Otakon coverage cut right through the gap between this and the previous article in this series, so that volume 5's entry ended up being postponed over and over again. The next Bebop post should be up relatively soon.

In its penultimate volume, Cowboy Bebop picks up some of the steam that it lost in the previous four episodes. The action is brought back in full swing, as is the great writing that defined the earlier episodes. But most importantly, the stories have more weight to them than the previous volume's episodes.

The first episode, "Wild Horses," is without a doubt the best on the DVD. Its combination of space action, a puzzling enemy, and great side-characters are the things that make people remember Cowboy Bebop long after they watch it. The episode's primary side-character, a young, energetic black mechanic named Miles, is a big fan of the baseball team the Blue Socks, and he religiously listens to their games over the radio. This theme of Miles' love for his radio and his baseball team is strewn throughout the episode, and the way it ties in with the plot that unfolds on the Bebop is pure brilliance. Plus, Bebop surprised me once again with yet another reference to 20th century culture, in the form of a refurbished space shuttle Columbia. It only alluded to until the end, and the revelation is worth quite a gasp.

The two middle episodes, "Pierrot La Fou" and "Boogie Woogie Feng Shui," are fun, but lack in particularly compelling side-characters. The villain of the former is nothing but an insane murderer, though the conclusion of the episode bears Bebop's trademark subtlety – just as Spike kills his enemy, Jet discovers the secret behind him, leading Spike to dismiss Jet's now-meaningless discovery. The latter episode features a weak connection between Jet and a young girl, and does little to progress the characters (though I was very interested in its noir-style narration). Finally, "Cowboy Funk" seems like a simple comedy episode, but in reality it gives us an interesting look at an aggravated Spike who has met someone just a bit too similar to him. As I've come to expect from writer Nobumoto, the hilarious ending ties in a bunch of off-hand comments from earlier in the episode.

I feel the quality ramping up, but where's the story? I haven't seen any sort of central narrative forming yet, so I wonder how the plot will come to a satisfying conclusion in one disc. I've definitely seen it done before, but will Bebop be able to pull it off with such a disjointed story? We'll find out next time!