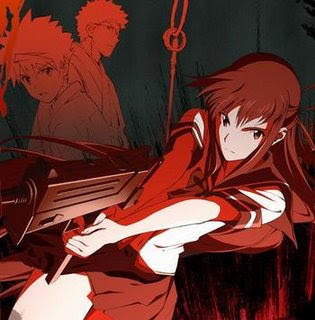 Hopefully, by now you’re pretty much aware of FUNimation’s desire to bring us fresh, crispy, brand-new anime NOW. Shikabane Hime: Corpse Princess (Shikabane Hime: Aka in Japan) is the first in what may be a long trend of anime released online, fully subtitled, through an American company. True, you can buy high-quality subbed episodes right now through iTunes, or watch them on YouTube or Hulu, and it’s perfectly legal. But we’ll hold off on the legality for a law firm podcast.

For now we’ve got guns, demons and boobies to discuss.

Studio Gainax picked up this supernatural action series from a moderately popular manga. Shikabane Hime follows Makina Hoshimura, an undead soldier who must slaughter 108 fellow "shikabane" (vengeful zombie/spirits) in order to achieve Heaven. Fighting alongside her is her contract monk, Keisei Tagami, a modern man using old-school methods. The real pull of the story is through his adoptive, detached younger brother, Ouri. Ouri’s fascination with death is a moth-to-the-flame archetype that is destined to leave him burned. The situation quickly reaches the clichéd catch-22 of “we both want to protect each other, but we’ll both get killed in the process,” as Ouri includes himself in many of Makina’s missions.

Gainax flexes their muscles with the opening animation, whipping zombie arms and bullet casings like they were party-poppers at a New Year’s party. The fluid animation paired with the distorted close-up angles bears the proud badge of the studio that gave us Evangelion. Shikabane Hime tones down most of its colors to create the eerie atmosphere we’ve come to associate with modern Gothic stories. It’s dark, almost macabre coloration reminded me of Blood+ (though without the whiny characters). It is strange how the camera holds Makina in frame: her ice-cold beauty and violent passion is quite hot. Almost all of the backgrounds and scenery are unmistakably grim however, due to the lack of any major light source.

Sadly, at times the overbearingly grim tones leads to flat, professional supporting characters that do not elicit much sympathy. Even so, director Masahiko Murata tries to interject slapstick humor and innuendo comedic relief... to no avail. If anything, the jokes are so forced and out-of-place they distract from the task at hand: shooting up zombies. Still, I’d hate to think of how dull this series would be without Keisei’s closeted otaku-tendencies.

Gainax’s staff brought out their big guns in letting Shou Aikawa handle the script. His ear for corrupted morality can be heard in the Fullmetal Alchemist movie, Rahxephon, Wrath of the Ninja, and the OVA of Vampire Princess Miyu. In short, a very experienced man with one foot firmly planted in the realm of the fantastic.

Beyond the gripping stories of people resurrecting as powerful monsters only to be mowed down, I was most invested in the political struggle of the monks’ hierarchy. Indeed, the tethering of "shikabane hime" (corpse princesses) to fight off monsters is a no-win situation of fighting fire with fire – and boy do they use fire. Makina’s firearms are a beautiful, bouncing pair of... Uzis. Another corpse princess fights with her fists, another with a big-ass hammer, and another with a sniper rifle. This team of living corpses perpetually argues among themselves and with their contracted monks, leading to a more fitting, subtle (though definitely black) humor.

As the story exhumes the mysteries surrounding Makina’s death and Keisei’s involvement with the Kougon Sect, it is clear that Ouri’s involvement with the hime will only pull him deeper. I will not spoil the end of the first season, but I will remind you to stay tuned to FUNimation’s YouTube channel, as Shikabane Hime: Kuro, or season two, is already in post-production and ready to launch here in America. It turns out that Gainax is keeping themselves quite busy between this production and both the Gurren Lagann movies. They're clearly not going to let Studio BONES have all the fun.

Shikabane Hime is an all-around decent action piece that dictates a black-and-white argument on using monsters to blow away other monsters. Nothing ground-breaking, but much better than your run-of-the-mill zombie film.