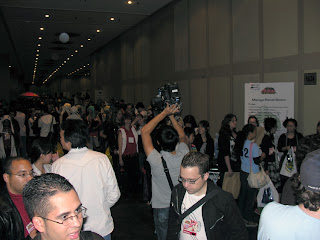 Walking down 34th St., you would never have guessed what was going on at the nearby Jacob Javits Center on a rainy day in late September. Sure, maybe there are a couple people with weird leather jackets on, but you expect such things from the greatest city in the world. Take a walk inside the Javits Center, though, and everything changes. Inside of this fantastic world, presumably normal people shed their skins, and the mundane world of the city streets comes alive with the boundless passion of anime fandom. As I stood on the escalator moving down into the heart of the New York Anime Festival 2008 Dealer's Room, I felt like I was on the threshold of an entirely different world.

The New York Anime Festival is far from my first convention, but it is surely the first one that really made me say, "Wow!" That was last year, and I definitely got the same impression in 2008 when I once again beheld the spectacle that is the blue-carpeted Dealer's Room at NYAF. At the front of the hall was Bandai Entertainment's gargantuan screen showing previews for their newest shows. Not to be outdone, FUNimation had an equally large (albeit more shop-like) booth, which focused much more on actually buying DVDs and talking with sales reps. The rest of the room was coated with dealers selling everything from brand new DVDs to retro VHS's, from replica swords to Legos. The Artist's Alley was along the right wall and in the back corner.

Unfortunately, I wasn't as free to attend panels as I was last year. With press badge in hand, I was forced (by my own boundless ambition?!) to run from industry panel to industry panel, only shirking my duties once so I could visit Otaku USA Magazine - a panel run by Erin Finnegan and Jeff Kight that ended up being very informative, regardless of the lack of Patrick Macias. The industry panels often held little of interest, but there were a couple gems hidden among the reiterations of existing licenses. As always, the rest of the "press gang" helped spice up some otherwise boring panels, so of course I'd like to give some shoutouts to Deb Aoki, Erin Finnegan, Gia Manry, Brad "Dick McVengeance" Rice, and of course "Kurono K," who's not really press but we'll let him off the hook this once.

As is to be expected from the wonderful people running the convention, everything went perfectly smoothly in terms of my being press. My badge was quickly approved, as was my interview request, and a press-only computer was provided for on-site blogging without the $70 Wi-Fi fee. I did have a problem with some faulty power outlets during my interview, but it all worked out in the end. Special thanks to Peter Tatara and Kim Mueller for all of their helpful work in setting up my press access and interview (and of course for being really friendly people).

Still, the actual way that the convention hall was set up was noticeably less intuitive than last year. Whereas last year the Festival used the back of the Dealer's Room for a huge stage, this year that back area was unused, and instead there were two different stages for different activities. Closed into what were essentially two panel rooms was the "Anime News Network Theater" (yes, they sponsored NYAF), hidden behind walls where few were likely to find it by accident. Outside of those doors was the hallway that lead between all of the panel rooms, and dead center in this hall NYAF had placed a large stage where musical performances and other events would be held. Believe me, when our very own Uncle Yo was performing, it was frustratingly difficult to move past the stage and get to a panel room.

The two stages represent two very different - and very wrong - ways to make your stage/theater: one is too central, and one is too hidden. Exacerbating the above problems, the Festival also closed one of the Dealer's Room entrances, meaning that there was only one way in and one way out. Luckily, everything was nicely compartmentalized so that events were in one hall, the Dealer's Room was in another, and con-staff rooms were on the outer periphery, making finding my way around the huge area a little bit easier.

I hung out with the usual folks (as well as some new ones) over the course of the weekend, including Brad, Gia, Scott, Kurono K, Stephen Walker, Deb Aoki, DJ Ranma and Kuro Usagi, Erin and Noah, and of course our very own Karl Custer, who kindly allowed me to use his Artist's Alley booth as my base of operations.

Even with some of its navigational problems, the New York Anime Festival is a downright great convention. Peter Tatara and his crew of awesome convention organizers constructed a show that not only featured amazing guests (Yoshitaka Amano, Hideyuki Kikuchi, and Rie Tanaka) and a great location (NYC baby!), but also attracted pretty much everybody who's anybody in anime journalism in the New York-New Jersey area. If you are an anime fan living reasonably close to New York City, you have absolutely no reason to pass up New York Anime Festival 2009.