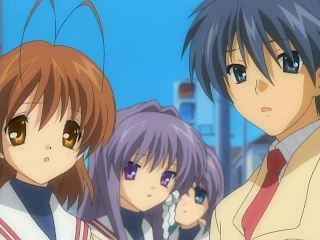 According to firsthand sources, Matt Greenfield (ADV Films' Vice President of Marketing and Communications) and Greg Ayres (voice actor) both confirmed ADV Films' license of the anime CLANNAD while at Sogen Con 2008 in South Dakota. While there are no details on if this is the TV anime, film, or second TV anime, the most likely case is the first series, since the others are offshoots of the original.

This begs quite a few questions. First off, did nobody want CLANNAD? ADV has been losing licenses to other companies left and right, so it seems that everybody else backed off on CLANNAD, perhaps because of the idea that "moe doesn't sell." Not to mention, does the license of CLANNAD signal ADV Films really making a comeback? I doubt it, since the show will not be a big moneymaker, but we can all hope that Matt and company will be back in action as soon as possible.

The strangest thing of all is that instead of having a presence at this past weekend's huge industry event, the New York Anime Festival, where they might have received more press for their CLANNAD license, ADV chose instead to announce it at Sogen Con in South Dakota, meaning that this license will almost surely go under most people's radars.