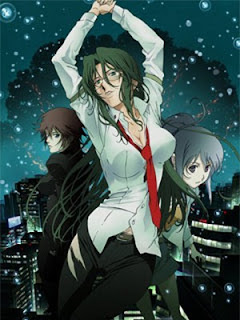 I assume most of you are still reading... Please ask your parents to leave the room now.

Due to the extreme graphic nature of this work of supernatural mystery, you cannot claim fandom to Mnemosyne without being labeled one of “those fans.” The kind that never leaves his basement and spends his time posting reviews of anime series like Mnemosyne. (oh wait...) Nevertheless, every series deserves a chance to tell its story. Right?

Rin Asogi’s day job as a jack-of-all-trades investigator is just a cover for her true identity. She, like a handful of other women around the world, has been touched by a time spore of the great tree Yggdrasil, the literal keeper of human memory. As a result, Rin is immortal (in both the Highlander and the Wolverine sense). Her habit of sticking her nose in criminals’ businesses makes her the target for extremely sick mercenaries. With each chapter of the six-episode mini-series, we learn another fact about her relationship to Yggdrasil and its plans for her while encountering the sadist of the day.

Due to Rin and her partner Mimi’s immortality, many years skip between episodes, going from 1990 to 2055, which was an interesting way to show Rin (and her fashion sense) as the only consistency over the years.

I like Rin. Built like Bebop's Faye Valentine and as iron-willed as Eva's Misato Katsuragi, Rin somehow retains her natural compassion. She assumes a very male role in order to protect her clients, but at the day’s end, she is still a woman grasping for affection. Her views on man’s fragility cause her to hold back many punches against the people trying to kill her. Though she can kick ass using an array of odd weaponry, including darts, chains and a shotgun-shell-loaded boxing glove, she gets her ass handed to her quite a bit. The ways she dies include, but are by no means limited to...

No review of Mnemosyne would be complete without touching upon its key element: sadistic violence toward naked women. Good Lord. Do not watch this anime while your parents, or people whom you wish to respect you, are in the same hemisphere!

Script-writer Hiroshi Ohnogi remained true to the original novel by sparing us no gory detail; the depravity in this series is enough to make Stephen King blush. Remember how those women become immortal? Well, men turn into powerful red-winged angels that dress like The Rocky Horror Picture Show meets Hellraiser. These angels seek out immortals in order to embrace them in the throes of boundless sexual desire while literally chewing them to pieces.

Sex and violence become the same grotesque pulse that thrusts the story forward. Rin is persistently hunted by a seemingly immortal cyborg assassin who gets her pleasure from watching Rin squirm. Even worse is a fellow immortal named Apos, voiced in Japan by the same actor who does Gaara from Naruto. His boyish good looks don’t justify the pile of nude, impaled women he keeps in his gardens, hoping to one day add Rin to his collection, next to the tulips and the severed heads.

Since the nudity and violence are the aesthetic focus, the mysteries that Rin investigates are usually complicated fluff that buy time between brutal slayings – don’t expect much from the mysteries, just be happy for the rare times that Rin is wearing pants and a shirt.

Still reading? It gets worse! I actually like this series.

To see Rin beaten as badly as she is and still find the strength to fight back and protect her friends is downright inspiring, and I found myself choking from grief (as well as vomit) from the cliff-hangers that rock the second half of the series. Obviously, this show is not for everyone. In fact, the people whom this graphic story is geared toward should probably register themselves at meganslaw.com. Still, I enjoy the soft ambiance and electric guitar of Takayuki Negishi’s music, a style very reminiscent of the video game Parasite Eve. Visually, this is considerably low-budget, but the scene direction is superb. Shigeru Ueda (who has done episode direction on Blood+ and Serial Experiments Lain) could have filled the series with extreme close-ups and talking heads, but instead he keeps the camera moving, focusing on Rin’s kinetic energy and honing time-passing montage sequences very well.

I will not openly encourage you to watch this show; but if you can handle the traumatic depravity of Elfen Lied, want older characters who don’t cry nearly as much, are mature enough to keep your hands where I can see them, seek ye the daughters of Mnemosyne.