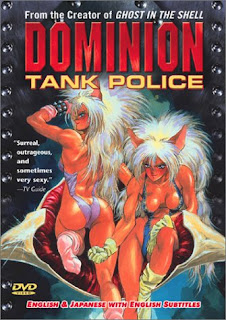 The futuristic city of Newport is an endless pile of harsh, unwelcoming buildings stewing under a perpetual dark “bacteria cloud.” Every 36 seconds, a crime is committed. (Beat that, Detroit!) To protect the city, the Tank Police are formed; madmen with big mouths, bigger guns, and less moral guidance than Million Knives.

Masamune Shirow, known most for his iconic work Ghost in the Shell, has spent a career imagining man’s parallel evolution with machinery and their effect on each other. For Dominion Tank Police, he decided to once again question the line between authentic humanity and artificial humanity, a topic that’s just a tad too deep for an anime with two strippers on the DVD’s cover.

Our four episodes center on the initiation of Leona, the first girl to transfer into the testosterone-saturated Tank Police. As she learns the way of the Newport City Tank Police, she builds her own mini-tank named Bonaparte, something resembling a Dalek from Dr. Who but with nastier treads. Her journey becomes one of initiation, acceptance, and finally a literal struggle for justice vs. pride. She’s cute, impulsive and stubborn as most girls who drive assault vehicles, but her development remains relative.

Becoming a viewer of the Tank Police is all about reveling in the frat house level of maturity and pride of captain “Britain” (on my translation at least) and the rest of the loosely-drawn squad. These guys regularly patrol the streets en mass, causing more destruction than the Big O and turning enhanced interrogation into a game show complete with betting, bunny girls and throwing knives!

Oddly enough, the character whom Shirow forces the most sympathy for is the main antagonist Buaku, a small-time crook with big-time weapons. Buaku and his partners, twin gun-enthusiasts/strippers Anna and Umi (a cross between the American Gladiators and Thundercats), begin by assaulting a hospital for “perfectly healthy people” in order to steal jars of urine. No, no, you read that correctly: pee-pee. Once they fail at that, Buaku goes for a priceless painting, only to be thwarted again by the Tank Police. It is in this second arc that the story sacrifices its pacing for a deeper message on the self-imposed value of life.

Don’t get me wrong; there are many tanks. Big tanks.

Thus, there are explosions. Big explosions. No character can take center stage over Shirow’s masterful detail and imagination in his armored vehicles. What keeps this OVA a step below Ghost in the Shell is the sluggish pacing combined with its desire to leave everything as open-ended as possible. Dominion Tank Police runs into the same problem that Full Metal Panic did in that it tries to combine a high-tech cop drama with another conflicting genre. For DTP, it was the final episode’s delve into surrealism and philosophical drivel that collapses the story into the anime cliché of flashbacks and rhetorical questions.

Still, slow scenes and loose plot set aside, Masamune Shirow’s Dominion Tank Police is a must-see for fans of the mecha-cop genre. Patlabor, Appleseed, Ghost in the Shell, and Armitage III fans will revel in the detail of all things mechanical. Sure, it's not quite as aloof or high-brow as Ghost in the Shell, but it's a lot more fun to watch in a crowded room full of open-minded people.