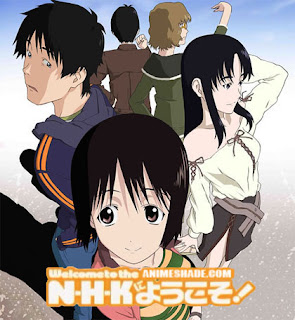 I can't believe that we missed this rather important bit of news, but a big announcement came out on May 22 in the long line of CrunchyRoll evolutions. ADV Films, one of the largest anime distributors in North America, announced their agreement with online video streaming website CrunchyRoll, in which the site will stream the official ADV dub of the GONZO anime Welcome to the NHK for free. This means that anyone in the United States, United Kingdom, or Canada can watch Welcome to the NHK on CrunchyRoll for free, and ADV will make money through ads included in the video and its enclosing page.

Just months before, GONZO (creators of WttNHK) formed their own agreement with CrunchyRoll to allow streaming video of their newest television anime, The Tower of Druaga and Blassreiter, to be published on the site directly after they air on Japanese television.

This new agreement will likely face similar criticisms as the former, due to concerns over the clearly illegal business practices of much of CR's site. (They feature fansubs but make money off of site ads, which is both illegal and contrary to the "Fansub Code of Honor") In addition, it seems that the only Japanese animation studio willing to make the jump to digital distribution as of yet is GONZO, prompting fears that, at the end of the day, the controversial studio may fail in this ambitious experiment.

Nevertheless, this deal makes ADV the first North American anime company to distribute an anime title over a third-party video-streaming site. It is the hope of many fans (including myself) that this will put pressure on its competitors (namely FUNimation and BANDAI) to move into the same realm of distribution. This change could potentially turn around the faltering worldwide anime industry, and might specifically help ADV Films move out of the seeming rut they have been in since canceling many of their titles this past January.